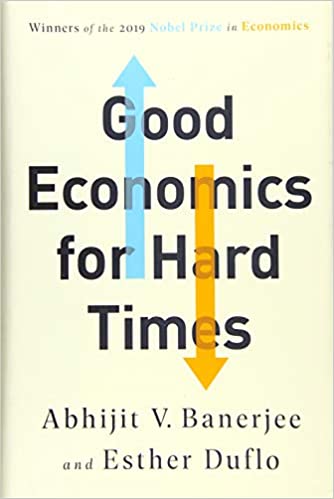 There's More to Economic Behavior than You Think

Economics is more than stas, investments, and GDP. Two leading economists, Abhijit Banerjee and Esther Duflo, begin their new book, Good Economics for Hard Times, by saying, “restoring human dignity to its central place, sets off a profound rethinking of economic priorities and the ways in which societies care for their members, particularly when they are in need.” Good economics must have people at the center.

Banerjee and Duflo prove — through evaluating lab experiments, field experiments, statistical studies, and common observations — that there is more to our economic behavior than meets the eye. They argue that economics and economic policies must consider historical, sociological, and psychological factors as well. Society influences economic behavior for good or for ill.

Good Economics for Hard Times forces us to rethink economics. For example, while we think we may know better what the poor really need, Banerjee and Duflo argue that “the choices of the poor often make more sense than we give them credit for.” This book also warns that even if we are shown facts, we might be reluctant to jettison erroneous thinking.

In multiple studies throughout the books, ranging from race identity of Hispanic students to perceptions of immigration policy, Banerjee and Duflo find that “truth did not sway their opinions.”

Good Economics for Hard Times shows the many factors at play when we think about the economics of trade, economic growth, climate change, immigration, inequality, bias, and discrimination. These depend on variables such as background and family dynamics. In short, there are personal stories behind the numbers.

Expect to be challenged as you read this fine book. Expect to have conventional wisdom turned sideways. Such an epistemological disruption might move us to “restoring human dignity to its central place.”

“What is dangerous is not making mistakes, but to be so enamored of one’s point of view that one does not let facts get in the way. To make progress, we have to constantly go back to the facts, acknowledge our errors, and move”