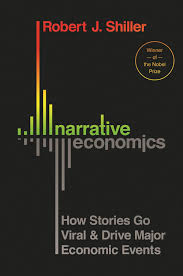 Fact or Fiction? The Answer May Not Matter

We hear the same financial advice over and over. If you’re like me, you probably don’t think too much about the truthfulness of the advice. Yet our lack of scrutiny into common advice doesn’t stop us from acting on it.

We’re not alone. In his new book, Yale University economics professor Robert J. Shiller argues just that. The book, Narrative Economics: How Stories Go Viral and Drive Major Economic Events, suggests that a lack of attention to the way stories shape economies explains why economic prediction offers middling results — often with drastic effects on the people who comprise an economy.

Basically, Shiller argues that viral storylines, true or false, outlive and outreach even the best economic models. And if you fail to appreciate how these narratives shape economies, you fail to understand economics. That’s narrative economics.

“It is rare to see a professional economist, in interpreting the past or forecasting the future, quoting what a businessperson or newspaper writer thinks is going on, let alone what a taxi driver thinks,” Shiller writes in the preface to his book. “But to understand a complex economy, we have to take into account many conflicting popular narratives and ideas relevant to economic decisions, whether the ideas are valid or fallacious.”

Shiller makes his argument in four parts. The first demonstrates the concept of viral narratives, looking at the tax-related Laffer curve narrative and the more recent digital currency Bitcoin narrative; the second systematizes the characteristics of the economic narratives into seven “key propositions”; part three looks at several “perennial narratives” — like the ideas about frugality — and the staying power they exhibit as economic decision-makers. Finally, Shiller offers some constructive analysis, looking at where currency narratives are driving the economy and how understanding narrative economics can help.

‍Narrative Economics is a thick book, in size and scope. And, yes, a Yale professor published it through Princeton, and Schiller’s argument comes layered with economic language and categories. But the organization and writing style makes the book more accessible than you might expect. And because his premise necessarily entails cultural narratives more than formal theory, a lot of Shiller’s source material will look familiar to anyone with a TV.

“We have to take into account many conflicting popular narratives and ideas relevant to economic decisions, whether the ideas are valid or fallacious.” Robert Shiller,