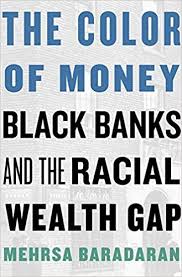 After Black Wall Street, What?

The Color of Money: Black Banks and the Racial Wealth Gap

On June 20, 2020, The Wall Street Journal published this article, “Netflix to Invest $100 Million in Black Community’s Financial Institutions.” The idea to invest in the Black community’s financial institutions came from Aaron Mitchell, a member of Netflix’s executive recruiting team. Mitchell said Netflix had already been discussing diversity recruitment and the makeup of its top leadership, as well as barriers to capital in Black communities arose in these conversations.

Mitchell said he was inspired by the book The Color of Money: Black Banks and the Racial Wealth Gap, by Mehrsa Baradaran. The Color of Money asks two questions: (1) What led to the need for black banks? And (2) why do we still need Black banks in the 21st century?

In The Color of Money, Mehrsa Baradaran traces the historical factors leading to the wealth gap between white and Black communities, the emergence of Black banks, and the current state of Black banks. Baradaran states on the early pages of her book, “Today, across every socioeconomic level, blacks have significantly less wealth than whites. Over a third of black families have either negative wealth or no assets at all.” Why is the wealth gap a fitting place to start? Because “the wealth gap is where historical injustice breeds present suffering,” argues Baradaran.

The wealth gap has emerged because for 246 years, enslaved people were not able to participate in the economy as buyers and sellers; rather, as slaves, they were used as tools to amass wealth for their white slave owners. Not only were Black people excluded from participating in the economy, but they were banned from membership in thrift and loan institutions. Because of this exclusion many free Black businessmen and clergy pulled their own capital to organize early iterations of banks, necessary to serve Black communities. However, many of these attempts to launch Black banks failed.

Eventually, the federal government created the Freedman’s Savings and Trust Company, better known as the Freedman’s Savings Bank. Because the bank appeared to be a gift from President Abraham Lincoln and connected to the federal government, formerly enslaved people trusted the bank and deposited their money. While the creation of this bank appeared to be an altruistic gesture, Black people would soon learn that this bank, considered a “heavily advertised piggy bank,” turned out to be a facade. This sour experience sowed a distrust of banking among Black people. However, this experience also planted seeds for a century-long obsession with establishing successful Black banking.

The rise of Black banking coincided with the Great Migration. Baradaran writes, “The first wave of the Great Migration from 1910 to 1930 coincided with the height of discriminatory segregation and the golden era of black banking.” Black people could land jobs but not loans from white banks to buy homes. So, from 1900 until 1934, some 130 Black banks came into existence. Baradaran reminds us, “Wherever African American populations could be found, black banks flourished to meet both the opportunities and challenges of a segregated economy” (70).

The need for Black banks would be greatly emphasized in President Franklin D. Roosevelt’s New Deal. Ostensibly, these policies radically changed our nation’s banking and credit markets. Notably, the New Deal propelled American prosperity “through a mortgage and consumer credit apparatus that was exclusionary.” Sadly, “these [policies] and agencies coupled with postwar economic growth created a robust home-owning, capital-creating, and predominantly white middle class. They also made the black ghetto a permanent feature of the twentieth century” (103). Conversely, these policies and agencies created America’s white suburbs.

Under the auspices of the Home Owners Loan Corporation (HOLC), neighborhoods across America were assigned a color value according to this rubric: A (green), B (blue), C (yellow), and D (red), where green was deemed the most desirable and red being the least. Green areas, of course, were homogeneous and white; red neighborhoods were predominantly black. This color-coding became the basis for the practice of redlining. Banks made loans to those in green-colored neighborhoods, but loans were denied to residents in red color-coded neighborhoods. The present danger of racism and discriminatory lending means the preservation of Black banks is all the more urgent and essential. “If policymakers are committed to closing the wealth gap, black bankers must be seated at the head of table as they have firsthand understanding of the headwinds affecting black prosperity” (279). Black banks cannot close the wealth gap alone. Jeremiah 29 teaches us that when the city thrives, we thrive, so “a greater wealth equality will benefit not just the poor, but the entire society” (280).

This book sounds a call for action: Either white Americans come alongside Black banks to help them become fiscally vibrant or, together, we eliminate the need for Black banks by mortifying racism and discriminatory practices of white banks.

“Wherever African American populations could be found, black banks flourished to meet both the opportunities and challenges of a segregated economy.” – Mehrsa Baradaran, The Color of Money

The Color of Money: Black Banks and the Racial Wealth Gap