Makers: About halfway between Hell’s Kitchen and Times Square, Ted Morgan’s Beer Culture is a place to enjoy the best modern creations of one of the world’s most ancient drinks. 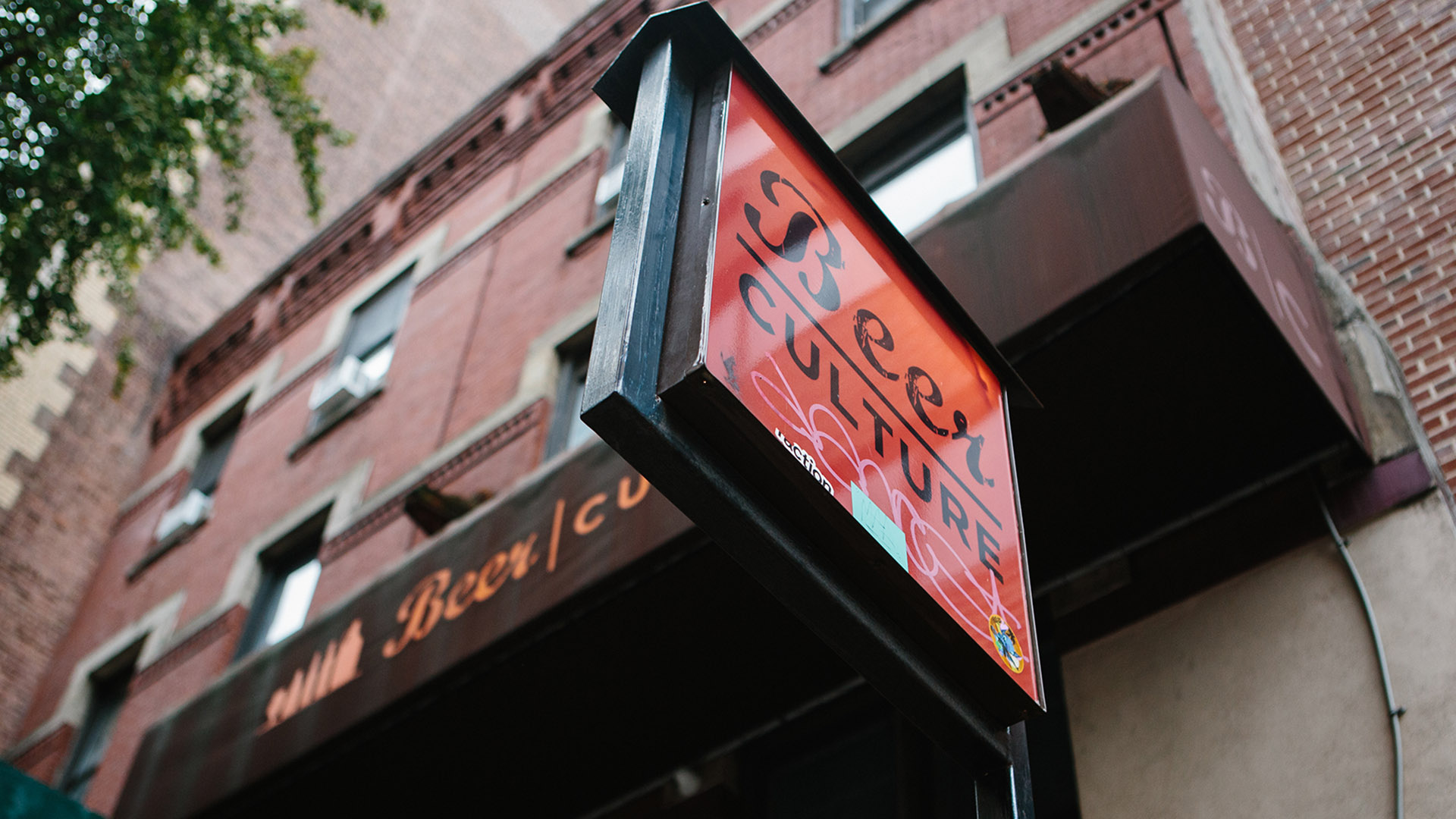 In 2013, Ted Morgan opened the doors at Beer Culture, a beer emporium with two outposts in Manhattan. It's no small risk opening a new bar or restaurant in New York City. A new business of the kind opens, on average, every day in the city. But a staggering 80 percent close within five years. Despite the prospects, Morgan knew he had something good.

A self-described “beer nerd,” Morgan has been a beer hobbyist from the time of his first drink — which, he’s careful to mention, did not happen until he was well over the legal age. Morgan’s journey from being a simple appreciator of good beer, something not always welcome in Christian circles, to owning two bars in the high-stakes New York City restaurant scene is a story of marked interest in an age-old pastime.

This is age-old, by the way, in the range of thousands of years, not hundreds. A song written by an ancient Sumerian in southern Mesopotamia called the “Hymn to Ninkasi” was etched on a rock in approximately 1800 BC. The etching also included a recipe for making beer. Some scholars think the Ninkasi hymn was  popular even a thousand years earlier than 1800 BC, and evidence exists that beer was consumed in Mesopotamia (modern day Iraq) as far back as 7,000 years ago. By almost any measure, beer is one of the oldest drinks humans have produced, and its production and consumption have even been credited as building blocks for human civilization.

Morgan is one of many who keep this tradition alive — he’s always had an interest in craft beer. When traveling, he would taste expensive international brews, increasing his curiosity in what makes a beer different and what makes a beer good. “I was never one who liked sweets,” Morgan explained to me when we chatted about the history of his interest in beer. “I liked salty, savory, even bitter. Beer appeals to all of that.”

For the people (and the beer)

Morgan initially moved to New York City to attend Columbia University, where he studied mechanical engineering. In this early part of his time in NYC, Morgan began attending a new and fledgling church. The services were vibrant, and the preaching — particularly about the importance of Christians in the marketplace — spoke to this young professional whose career was on the fast track. After 13 years in technical and management positions with one consulting firm, much of that spent working with large capital markets clients, Morgan joined another firm as chief operating officer. His personal life also flourished — he and his wife, Diane, had three children. His hobby began to flourish, too.

Often a visitor of beer gardens and specialized bars that carried exotic and rare brands, Morgan began hosting “salons” in the backyard of his townhouse in Upper West Side, inviting friends over to discuss specific topics and taste a wide selection of craft beers.

“I probably did the salons for 12 years,” he recalled. “It wasn’t necessarily a small group or community group. We’d just discuss Christian topics, and I’d offer 10 to 12 brands I’d recently been introduced to. It was such a good time — the salons brought a lot of disparate people together, we had lots of lively discussions, and everyone always really enjoyed themselves.”

As Morgan’s interest in craft beer grew, so did his frustration that there weren’t more bars or restaurants in Manhattan that featured the kind of unique, quality drinks he enjoyed. In fact, he found only three. He met Matt Gebhard, manager of a local high-end beer bar, and over (no surprise) a beer, they discussed what they saw as the void in Manhattan’s landscape. And they decided to start their own craft beer bar.

So they envisioned a destination for “beer nerds” like themselves. The interior aesthetic and overall concept were discussed at length, as they wanted a space in which serious craft-beer lovers would feel comfortable: “Dark wood, exposed brick, a wall of see-through, glass-door coolers filled with various brands of carefully curated beer. A setup that would entice beer lovers to try several different varieties,” Morgan said.

The venture took a bit of capital, plus a lot of courage when the capital almost didn’t come through. Remember, 80 percent of new bars or restaurants in NYC close within five years. Morgan approached investors who routinely turned him down, unwilling to take that risk. He wound up deciding to be the primary and almost sole investor. Gebhard’s role would be to manage the day-to-day operations, earning an ownership stake over time.

Confident that their beer bar would fill a niche corner in the market, Morgan and Gebhard found the perfect location in the Hell’s Kitchen neighborhood, just west of Times Square, and hired an architect to carry out the vision.

From the goodness of community and conversation over a carefully crafted drink, the plans for Beer Culture grew. But as Morgan’s dream grew closer and closer to reality, he received some backlash from personal connections in the Christian community, particularly those outside of the city. These connections found fault with Morgan’s opening a new bar in a city that already had an overabundance, not to mention a long history of hard drinking and cases of public drunkenness. And it's no secret that many people in and outside New York suffer various consequences of alcohol abuse.

Morgan had consider whether it was wise to move forward.

Before the bar, Ted hosted salons at his home: “We’d just discuss Christian topics, and I’d offer 10 to 12 brands I’d recently been introduced to. It was such a good time — the salons brought a lot of disparate people together, we had lots of lively discussions, and everyone always really enjoyed themselves.”

"But I don’t believe it’s wrong to drink alcohol or even to enjoy the effects of alcohol in moderation. And it’s not wrong to enjoy the craft of making beer; it’s an ancient craft and a very difficult process,” he said.

As Morgan weighed the conditions, he discussed his idea with pastors and other Christians in his life; he even offered to step down in his church if the project conflicted with his role as a leader. In the end, Morgan was pleased to find a great deal of support from many in his faith family who encouraged him to pursue this outlet for his hobby. What Morgan had the opportunity to do was demonstrate an approach that honors God and fellow New Yorkers.

In March 2013, Beer Culture on West 45th Street opened its doors. The Wall Street Journal produced a glowing review, and right away the bar made “The Top 10 Best Beer Bars” lists in publications like Time Out magazine. It is still consistently rated as one of the best beer bars in the city.

The theater crowd and local professionals nearby flocked to the new establishment. The Al Hirschfeld Theatre, on the same street, had conveniently just opened a new show, and with the show’s growing popularity, the line of theatergoers waiting to try the brand new bar wrapped around the block. Beer Culture was an instant financial success, and the seed money (put on the line by Morgan himself) was paid back in 18 months.

“Forty percent of our revenue came from professionals in the Hell’s Kitchen area, and then on the weekends we had a loyal local following from 5 p.m. to midnight,” Morgan said. “We expected the bar patrons to be primarily men … however, we were known to be female friendly,” he said. “The bartenders were always great, friendly, charismatic people, often actors who were trying to make it on Broadway. It was a great atmosphere.”

Patrons enjoyed a range of choices between 12 draft lines and over 400 brands from the U.S. and abroad. Beer Culture had only one outlet for mass-produced beer — “Grandpa’s Fridge” — which offered well-known retro brands such as Pabst and Miller.

Almost immediately Morgan and Gebhard began discussing the possibility of a second outpost.

“All the people who didn’t invest in the first one wanted to invest in the second one,” Morgan recalled. “If anything, I was the one wanting to put on the brakes!” But there were no brakes, and the second bar opened in 2015 on West 72nd Street in the residential neighborhood of the Upper West Side called Gebhard’s Beer Culture.

Promise after the pandemic

But the pandemic threw a wrench in the success of Beer Culture.

As the city emptied in 2020, many bars and restaurants closed. The ones fortunate enough to survive reopened with limited service, then required masks and social distancing. Tourism everywhere took a nosedive, and Midtown Manhattan became quiet as Broadway remained dark and the professional crowd that made Beer Culture a quick success abandoned the nearby office buildings in order to work from home. Thankfully, as of October 2022, crowds have returned. As a recent Wednesday night visit revealed, it seems the worst is over.

Although Morgan daydreams about the idea of building the franchise and selling it to a restaurant conglomerate, he’s content to  try to keep things afloat until the pandemic is a distant memory: “You know, our bar was always about quality over quantity. Those who are coming now still appreciate that.”

In a city that boasts over 20,000 bars and restaurants across five boroughs, Morgan wanted to serve a tribe that enjoys tasting superb beer from around the world just as much as he does. And almost 10 years later, he reflects with pride on his achievement of drawing together a group of like-minded individuals, united in pursuit of a common goal: to enjoy the best modern creations of one of the world’s most ancient drinks.