One reason, among others. 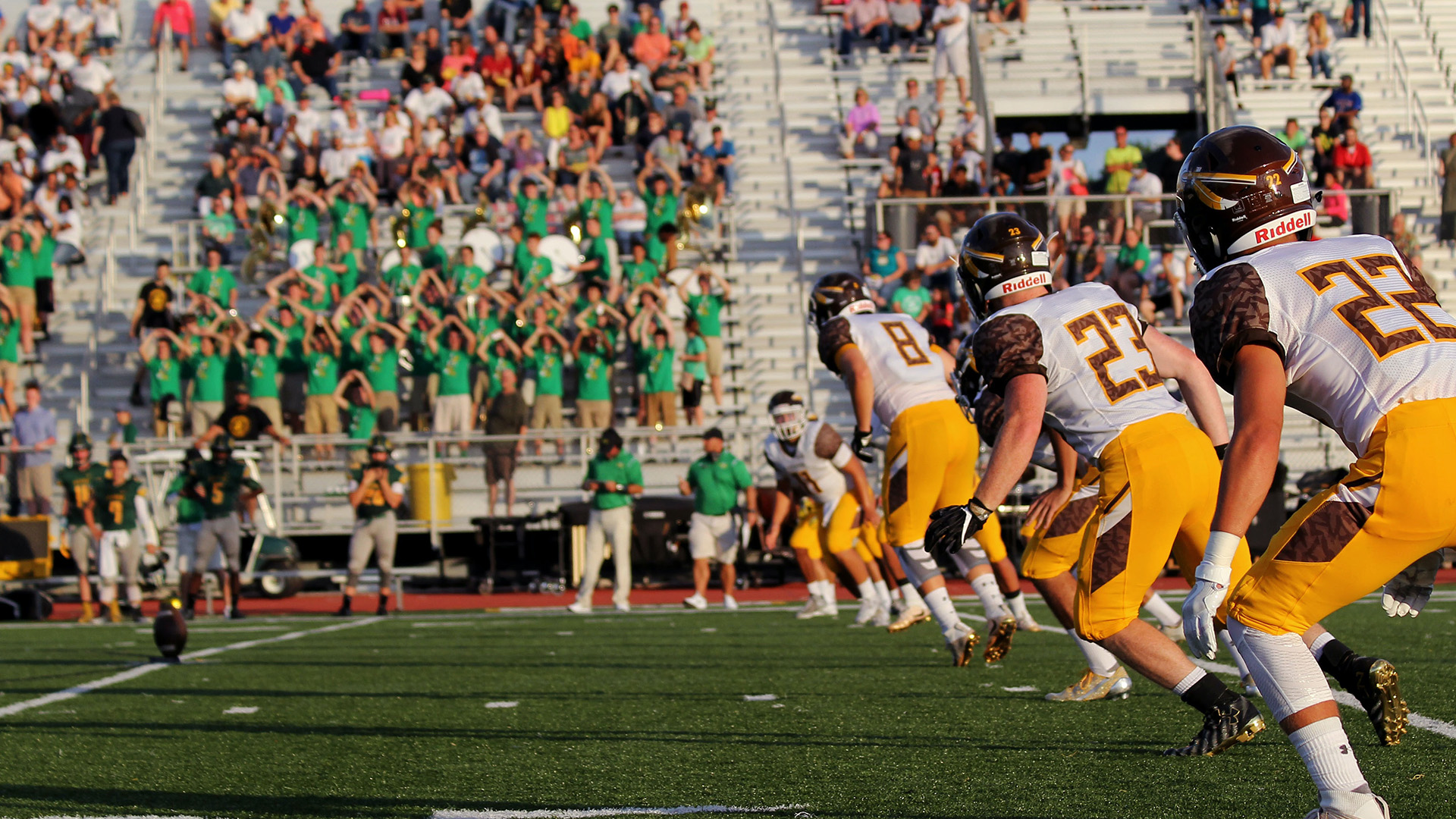 This past weekend, I changed hats. And I don’t mean proverbially.

Several factors contribute to this aspect, no doubt. Up until relatively recently, options for media consumption were pretty limited in the first place. And history almost always makes the mainstream look more like the only stream. Still, to a far greater degree than today, life back then meant, at least in part, knowing the goings on in the Ricardo family and tracking the adventures of The Boxcar Children, assuming the best of Walter Cronkite’s motives and, love them or hate them, having an opinion on the Beatles.

Now, don’t confuse my interest with nostalgia. I’ve seen Midnight in Paris, and I know the Wayne-Elvis decades toted as many problems as any. I’m not old enough to miss the bygone era, but I am curious about a society where friends and strangers, political opponents and people from across the country, broadly experience the same stories, true and fictional, at the same time and in relation to, and regardless of, real-world experiences.

I’m old enough to know some of that. Practically everyone around me in the mid-’00s followed The Office in real time. I remember the hubbub around Seinfeld’s worldwide event of a finale, but I’m still too young to remember the show pre-syndication. It’s the same with Friends. I remember the lines of kids at Barnes and Noble, Boarders, and Walmart waiting in the 11 o’clock hour for the next Harry Potter release, and I remember how the vocabulary and characters of the Wizarding World felt familiar, even for those who hadn’t read the books. I, for example, read the Potter books as an adult — which carried along some pros and cons — and my general impression was something like meeting the mutual friends you’ve heard about for so long.

I’ve yet to find a clear explanation of how the streaming revolution affects reading, but it seems almost axiomatic, doesn’t it? The Potter books, along with the embarrassingly successful 50 Shades series, were the last book(s) that we could talk about as being read by “everyone.” The Office, maybe, but more likely Friends was the last show “everyone” watched in real time. You and I could definitely quibble about the particular show or moment or bit of tech that made this happen, but it’s clear that the proliferation of on-demand, identity-based, any-time-anywhere stuff effectively stripped contemporary American society of shared stories, shared texts.

Except for one part.

Pretty often, the hat I’m wearing is a Jacksonville Jaguars hat. Not always, but often. Almost always it’s ’47 Brand Clean Up, be it Jaguars or whatever else. I, like you, follow sports teams — and wear their gear — for a complex of simple and circumstantial and intricate reasons. A hat repping the Jaguars shows a touch of support for my hometown’s only major pro team, and since football also represents that part of the country’s favorite pastime, fandom comes pretty easily. Still, I haven’t meaningfully lived in Jacksonville since 2006, and outside of some exciting teams in the ’90s, the Jaguars teams have done a tremendous job at being terrible, and terrible to follow, during almost my entire adult life — this year’s surprise success notwithstanding. Why wear a hat from a constantly disappointing team in a city where I don’t live? Because, for me, the Jaguars are more about a place and a people than a sport.

I grew up watching the Jaguars with my family, rushing home from church to catch 1 p.m. kick offs. I could basically only stay up late on school nights if the Jaguars had a Monday-night game. A lot has changed since then, but the team in teal still plays in the same stadium and my dad still watches from the same living room. So when I wear a Jaguars hat around Atlanta or in airports here and there, you might think I just really like a somewhat obscure, middling NFL team. I do. But it’s not just that. I am part of where I grew up and it’s part of me, and despite the years and miles and decisions that separate us, a relational connection remains between my family and me and between me and some folks I’ve yet to meet (but who know Myles Jack Wasn’t Down and who sometimes wear a Jaguars hat).

This is why sports matter. Because sports — at least the viewable ones we can lump into the category of sports entertainment — represents one of our society’s last-remaining shared texts. One of the last things that happens in real time, with no good asynchronous option, that attracts an equal number of people across political, class, racial, and religious divides. If you’re inclined, you can find plenty of numbers that bear this out. Go look at the Neilson data for TV for the last few weeks and compare streaming shows to what’s on live TV. A lot of people watch a lot of different stuff. Everyone lately is watching football, from the juggernaut of NBC’s Sunday Night Football to regional college games. Several weeks ago, on Thanksgiving last year, a regular season record 42 million people watched the New York Football Giants play the Dallas Cowboys. Last year, a reported 208 million people watched the Super Bowl live. In a couple of weeks, we’re likely to see an even higher number. And speaking of football, just a few weeks ago, 1.5 billion people around the world watched, in real time, the World Cup final. We seem incapable of agreeing on a trustworthy news source or of reading enough of the same novels to carry decent conversations. But later this year, a ton of us will sit together again for the World Series.

Again, don’t confuse my observation with a qualitative judgment. Of the things to read and watch and do, I’ll take 2023 over 1983 without question. I’d love to talk all about the merits of more access to more movies and shows, more books by an increasingly diverse array of authors, traditionally published and otherwise. You and I find ourselves in, debatably, a golden age of prestige TV, and it’s a lot of fun. Seriously, would I rather chat up a stranger about Cheers or stream Bloodline with my wife? The latter by an exponent of 36. Still, our new reality is this: Whatever we’re listening to, watching, reading, it’s almost all different, all tailored to us as individuals (as buyers, most likely, and as voters), as artificial preferential data points. After all, what we consume shapes us, and no one should act surprised that we feel increasingly different from certain people while feeling steadily more homogenous with others.

Sports brings people together — at the same time and in one proverbial room. This is what shared texts do. They serve as reference points for our life together, and they are part of what forms communities. If you’ve been around a healthy family, you’ve seen this in action: You hear stories or jokes or (taste) recipes from the past. Not with new details added, but as rehearsals of what everyone already experienced in person or vicariously. What mean these stones, asks Joshua. These stones are to be a memorial to the people of Israel forever.

Look, plenty of reasons exist why sports matter. Some are deep and theological, others shallow and commercial. Sports gives occasion to talk about anthropology and play. More and more, sports takes place in massive and complex — often ethically dubious — economic systems. Sports can add value to a home or community, and it can suck value from the same. Maybe you’re a sports person or maybe you’re not. That isn’t the point.

Back to hats. For two years, we lived in rural Alabama. I made a friend there who came from Michigan and who didn’t like football. Yet he almost always wore this one Alabama Crimson Tide cap. Why? Because shortly after he arrived, he learned that the easiest way to get the regulars at Bonnie’s Kountry Cafe to speak with him was to wear a hat with a red A on the front. For reasons various and sundry, the hat worked.

Which recalls a bit of why I changed hats this weekend. Last Saturday, the Jaguars lost a playoff game and thereby ended their season. I enjoyed the year, and I can’t tell you how excited I am for next year. But now comes the time of year I pivot just a little, and if you see me around, I’ll more than likely have on an Atlanta Braves Clean Up. No doubt the Braves of Atlanta mean far less to me than do the Jags of Jacksonville, and just about everyone carries multiple cross-sport allegiances. Anyway, I live here in Atlanta now with Atlantan people and it’s time we share something.